Open the Book of Gods and discover untold riches from Ancient Egypt along with fun features like Cloned Symbols, a Feature Drop and Free Spins Retriggers!

This recent Big Time Gaming release has plenty of features to keep the entertainment rolling as well as 243 ways to win! 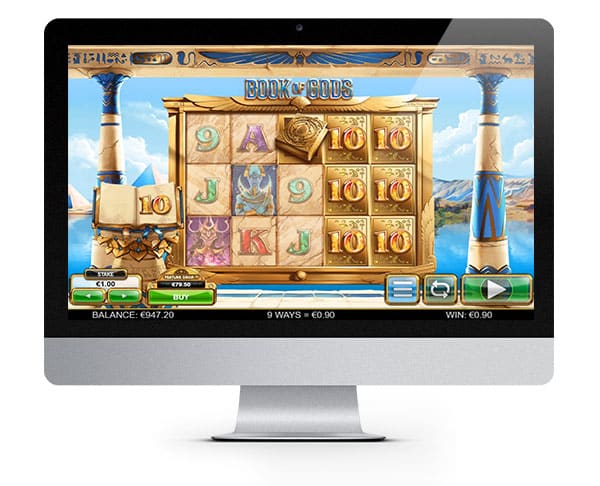 Book of Gods is one of Big Time Gaming’s more recent releases (May 2018), and the game looks pretty fresh to us! They have taken a popular theme again but managed to make it their own. You could be floating down the River Nile on a quest for untold riches thanks to the insane graphics!

We really like the design of this game and even though it is a theme we’ve seen before, Big Time Gaming has managed to make it look totally unique and a far cry from many of the other Ancient Egyptian themed slots we’ve seen along these lines. Don’t get us wrong, we love those games too, but we are always impressed by how BTG take things in a slightly different direction to great success! Nope, this game has it’s own style, and the fantastic use of the river backdrop really stands out on your screen!

The various gods and goddesses that surround the reels alongside the usual playing card symbols. Watch out for the Goddess of the Afterlife, and God of the Sun, Earth and Moon!

Book of Gods follows a 5×3 reel layout and before you start there are a number of controls you can set up to establish how much you wish to bet based on your budget and expected play time. You can place bets from 10p up to £40, so it has a fairly wide scope and will suit most budgets. You may wish to set up auto spin to save time. However, we always like to hit that spin button ourselves and feel the excitement build!

Lots of cool features make up this game including Feature Drops, Cloning Symbols, free spins, wilds and re-triggers. Here’s a roundup of what you can expect from this game:

Book of Gods has heaps to offer not only Big Time Gaming fans but fans of slots in general. Even though Book of Gods is missing the Megaways™ feature, it still has an impressive 243 ways to win. Plus it’s full of fun features that keep the gameplay interesting.