Things are about to go down in East Coast vs West Coast, a new NoLimit City slot game packed with hip hop flava, Enhancers and Free Spins! 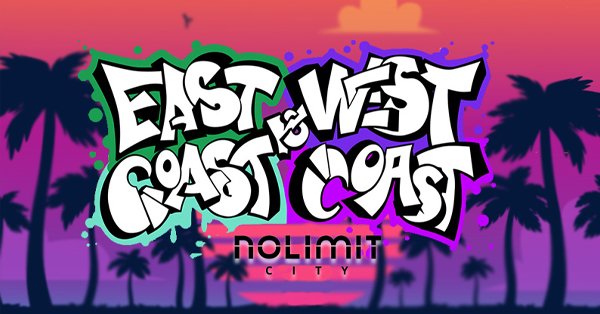 Who doesn’t love a good old rap battle? NoLimit City has taken their latest game to the streets in the ultimate battle of East Coast vs West Coast. But where will your loyalties lie?

East Coast vs West Coast is packed with features including many of the NoLimit City signature features such as xWays, which can transform into any other symbols as well as expanding the height of the reel. The high volatility game offers players the chance to boost their winnings with a series of Enhancer features including expanding reels, nudging wilds, multipliers, linked reels and more!

The game has been built in HTML5 and optimised for playing on mobiles as well as desktops. It offers up to 83,375 ways to win with a possible 30,618x your stake.

The design of the game is superb and any fans of 90s hip hop will love everything about it from the graphics to the music and sound effects that make up the backdrop of the game. They are taking you right back to the golden era of some of the best hip hop tunes ever made! 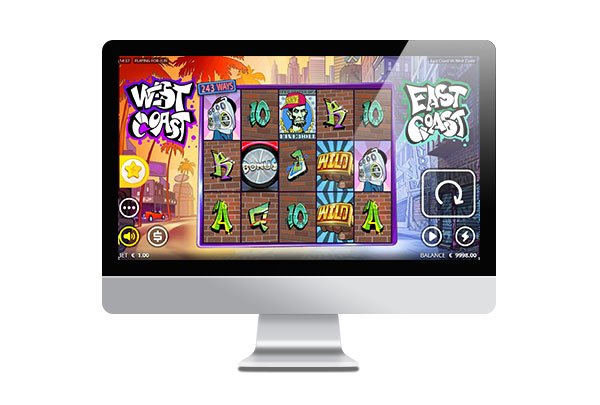 The 5-reel, 3-row grid is set within a purple frame with the city backdrop behind. It features the West Coast and East Coast logos on either side with two distinct looks to the background scenes. But which side will bring you the biggie dollars?

It’s all about the Dolla Dolla, with a bunch of cool symbols based around different value Dollar notes which have been customised to fit the style of the game. Be on the lookout for the shiny rims Bonus feature which can trigger the various free spins features. You can find out more about these free spins features in our next section.

The rest of the lower value symbols are made up of graffiti-style letters and numbers spray-painted onto a wall. Overall, the design of the game is superb. NoLimit City has taken a popular and iconic theme and really gone to town with it.

There is a whole lot to get through here, so get comfortable and enjoy the ride!

The wild symbol appears anywhere on the reels and can substitute for all symbol except for the Bonus symbol. 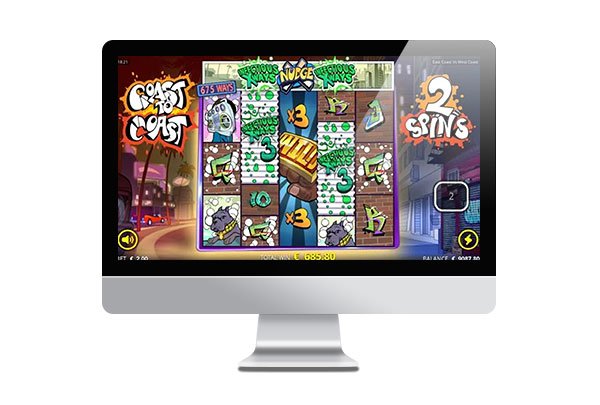 Watch out for the shiny rims on the bonus feature as these little babies can trigger a variety of different features.

While playing in any of the bonus rounds, the bonus symbol will only appear in reels where there are locked Enhancer positions available.

The Enhancer positions can unlock a series of different features including

The xWays symbols can transform into any other symbols except for the Wild and Bonus Symbols. It will create 2 or 3 matched symbol and also expand the height of the reel.

This adds a wild symbol that will nudge up or down until it has filled up the full reel. Each time it nudges it will also increase the multiplier by x1. If xNudge Wilds appear on multiple reels any multipliers will be combined in this instance.

In this enhanced feature, symbols will multiply to create more ways to win. Several of these will multiply each other for even bigger payout potential.

This feature will link and clone two reels that are side by side so they will display match symbols which can give you a bigger chance of a winning combination.

A random symbol will become infectious and infect all other matching symbols on the reels. These will then expand on their reel too.

NoLimit City offers the option to buy in to the features on their slot games and East Coast vs West Coast is no different. Be prepared to cough up some Benjamins though!

When you land 3 or four bonus symbols you get to choose whether to play them in East Coast or West Coast Spins. Each has it’s own features and benefits so it’s worth knowing a little about what you are getting into before you decide where your loyalties lie.

3 or 4 bonus symbols will award 8 or 10 free spins respectively. During the feature, the Infectious xWays is guaranteed to land on every spin.

Landing 2 or more bonus symbols during the feature will award two more free spins and also unlock an additional Enhancer position. Unlock all 5 positions to switch into Coast to Coast Spins.

3 or 4 bonus symbols will award 8 or 10 free spins respectively. During the feature, each spin will have one Enhancer from either xWays, xNudge Wilds, Multipliers or linked Reels.

If you landed two or more Bonus symbols during the feature you will inlock another position on the Enhancer bar. Unlock all five and switch to Coast to Coast Spins.

Yes. You can trigger a respin with two bonus symbols but to kick start the free spins features, you’ll need to land three or more. Depending on how many bonus symbols you get there are different free spins available as well as various Enhancers to add to the excitement and your chances of a win!

NoLimit City has given us some seriously great games recently and East Coast vs West Coast is yet another example of their creativity and innovation. High volatility, high action gameplay at it’s best!

East Coast vs West Coast is available at several casinos, so no matter what coast you happen to be on, we should have a casino for you! Check out our picks of the best places to play this new NoLimit City slot game.