NoLimit City has been at it again with their crazy new slot game Evil Goblins xBomb! This incredible six-reel game offers a whopping 729 ways to win and can be played from 0.20 per spin.

NoLimit City games aren’t available at every online casino but luckily we have the inside track of where you can find them and in particular where to play Evil Goblins xBomb right now. Check out some of our top casinos to play this new slot game: 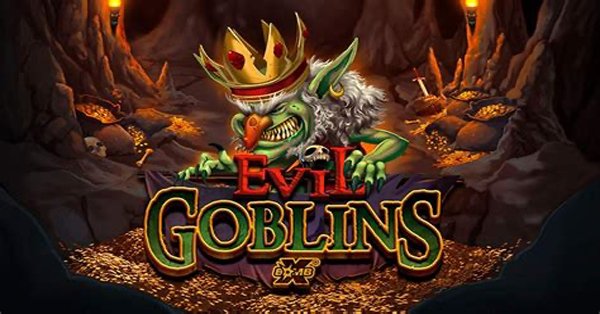 NoLimit City is one of our favourite software developers right now. Not only are they releasing new gaming content left, right and centre, but their games are some of the most innovative and exciting on the market. Absolutely packed with features and hosting some pretty impressive, if somewhat gruesome graphics, their games really stand out in the crowd. If you want high action, high volatility games, NoLimit City is the go-to brand you’ll want to check out. One of their latest games, Evil Goblins xBomb doesn’t hold back with nine separate features to get to grips with. Stick with us as we take you through everything you need to know about this game before you play!

NoLimit City games are always impressive when it comes to graphics and sound effects and that is very much true of Evil Goblins xBomb. They also aren’t afraid to tackle some pretty dark and creepy themes so this fits perfectly into their game portfolio.

The game opens to a landing screen which offers you the opportunity to scroll through the game’s various features. These include Goblin Feast Spins, Fresh Meat Spins, Resurrection Wilds, xBomb, Goblin Sacrifice and Evil 4 which is a multiplier based feature. More on the game’s features in our next review section.

Click on ‘continue’ to view the game board. It has a 6 reel by 3-row structure and sits within a red frame. On top of the frame are four creepy goblins, and in the background is a sinister-looking cave lit up by two flaming torches. There are a few buttons dotted around the reels that control the game.

The main spin button is the largest, so that’s pretty obvious right away. There is also a lightning bolt, which speeds up the spin time if you can’t be bothered to wait for all those symbols to drop into place. 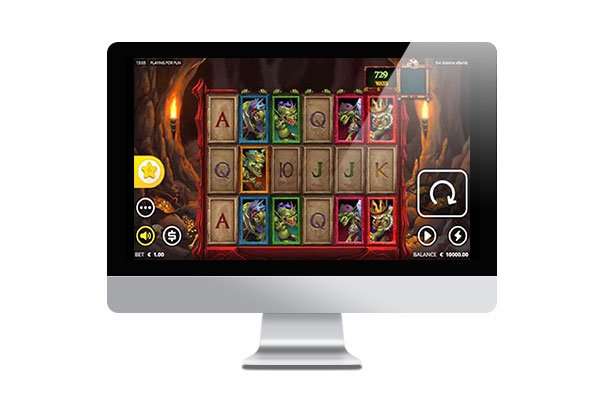 As you spin the reels a series of low-value symbols including letters and numbers fill the reels along with the various goblins and feature symbols. As you play, the symbols will drop out of view to be replaced from above with new symbols. Some might trigger a reaction or feature and you’ll see the goblins spring to life, blowing up symbols and exchanging them for wilds.

There are three different styles of Dead Wild symbols in the game. These can land on reels 2, 3, 4 5 and 6. The wild symbols can substitute for all symbols except for the Scatter. They can also be transformed in the Goblin Sacrifice feature, but more on that in a bit.

If you land a single Dead Wild symbol, it won’t do much but land 3 or more Dead Wilds and they will become Resurrection Wilds. The last wild will also create a massive multiplier as follows:

Once the goblin has thrown his grenade, he will vanish and be replaced by another goblin at random. If a player matches all four goblins, this will trigger the Evil 4 feature.

We’ve seen this feature several times in NoLimt City games so you may already be pretty familiar with it. When an xBomb symbol appears, it will explode all adjacent symbols except for Scatters, Dead Wilds and Resurrection Wilds. New symbols will replace the exploded ones and the win multiplier will be increased x1.

Each xBomb symbol will also add an additional row to the reel area with a maximum of 7 possible rows. The xBomb symbols will explode before the cascading symbols and it will still explode whether there is a win or not.

If a player matches all four goblins with the corresponding symbols below, it will trigger the Evil 4 feature. The matching goblin will be sitting on a golden throne above the first reel where he will boost the win multiplier by at least x4 or more. This means that any symbols on the reel below will be counted as x4 that symbol’s value. Each time a new matching goblin appears, the win multiplier will increase x1.

If the Evil 4 feature is triggered during the Fresh Meat Free Spins, the Goblins Feast Free Spins will be activated. Landing 2 or more xBombs will activate the explosive bonus mode. Landing an xBomb when triggering either of the free spins modes will ensure a guaranteed xBomb appears on every spin which can boost the reel size and multiplier during the round.

8 or 9 free spins are triggered with a guaranteed Dead Wild on each spin. This boosts the chance of a Goblin Sacrifice and xBomb to trigger. There is also the possibility of triggering the Evil 4 feature and upgrading to Goblins Feast Free Spins.

If you manage to activate the Goblins Feast Free Spins with at least 5 spins left to go, this will apply as a corresponding multiplier, x5 in this case.

Get 4 free spins with the Evil 4 multiplier activated. Any time a matching goblin appears above a reel, the multiplier will increase x 1 and the goblin will stay in position. Free spins will also reset to 4 which can happen a maximum of four times.

Any new matching goblins will turn into skeletons and stick around for the remainder of the feature. It can still turn any matching symbols into wilds.

Explosive Goblins Feast Spins is much the same with the added benefit of a guaranteed xBomb symbol on every spin.

There is a lot to unpack with this game. We would highly recommend trying out the game in demo mode first to get to grips with all of the features and functions. It’s super fun but can blow your mind a bit at first!

Yes, the game has two types of free spins but each one also has a variety of variables and features to contend with. Check out our game feature section above to find out more about how free spins work in this game.

This is a brilliantly designed feature-filled game from NoLimit City. They have thrown everything and then some at this high-action, high volatility game. Creepy grenade throwing goblins, xBombs, Free spins, massive multipliers, what more could you want from a slot game?