Just when you think it’s safe to head back into the NoLimit City waters, they bring you Karen Maneater – a crazy cannibalistic-themed game set in a post-apocalyptic world – yikes!

You can play Karen Maneater slot at a number of secure and trusted casino brands. Our team of casino experts have filtered out the pick of the best casinos where you can play this new slot game from NoLimit City: 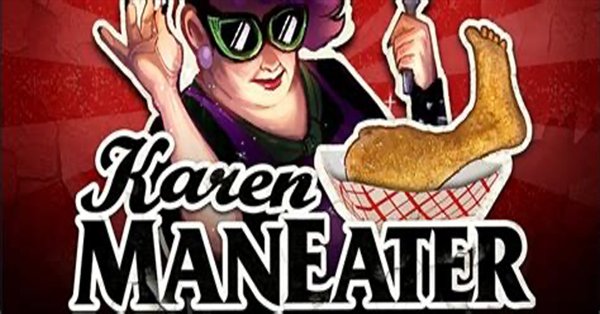 NoLimit City has served up yet another gruesomely themed slot game. Based in an apocalyptic world with a cannibal called Karen and her group of racoons, she is looting the town and cooking up some questionable-looking broths! Watch out or you could end up being her dish of the day!

Karen Maneater is a 6 reel dynamic slot game from NoLimit City with an incredible 11,757x max bet payout potential! The game offers a variety of stakes and has a base RTP of 96% and is classed as extreme volatility like many of NoLimit City’s slots are. In typical fashion, the game is filled with quirky features and features insane graphics and features that will keep you on your toes. This game isn’t for the faint-hearted! Stick with us as we take you through each aspect of gameplay and all of the game features so you are fully prepared before you play this crazy slot game!

There is never any holding back when it comes to NoLimit City slots. Known for its gritty graphics and dark themes, Karen Maneater fits the bill perfectly. The game is set in a fallen land filled with abandoned cities and landmarks and our “Heroine”, Karen accompanied by her gang of raccoons. 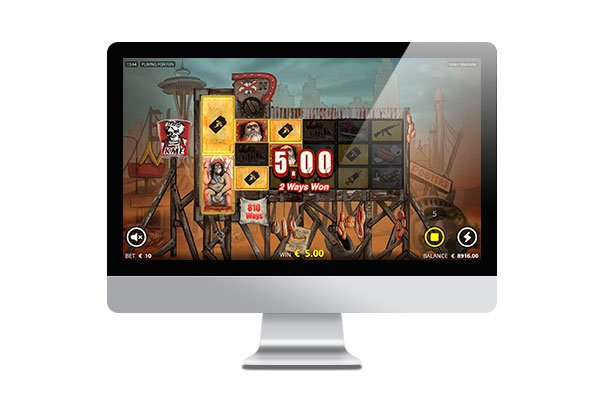 The unique reel set-up features six dynamic reels, each of which can expand and contract to include varying numbers of symbols creating many different ways to win. The symbols on the reels include apocalypse must-haves including toilet paper, a syringe, a battery, a beer mug and an Ak-47!

These are the lower-paying symbols in the game, there are also some dodgy-looking characters that make up the higher-paying symbols including a Bearded Man sitting on the toilet, a Drunken Redneck, Steroid Junkie, a Demonic Sharman and of course Karen.

The game also has a couple of symbols of note including the Gas Cannister Wild, xWays, Infectious xWays, Racoon Scatter and Sticky xWays. The xWays symbol functions will be familiar to any NoLimit City slot fans out there, but we will cover every feature in more detail in the next section of this slot review.

Karen Maneater has six different features including some signature NoLimit City mechanics such as xWays, Infectious xWays and Sticky xWays. Throw in some unique features to fit the grim nature of this game, and it’s a recipe for some tasty gameplay!

Regulars to NoLimit slots will be familiar with this feature which appears in many of their recent games. In Karen Maneater, xWays can appear on any of the middle four reels. When they crop up, they will transform into a random symbol and will reveal a symbol that is between 2-4 in size creating more ways to win! The xWays feature can only appear in the base game.

The Infectious xWays symbols can only land in reel one in the game and when it does it will reveal a symbol. It will affect any matching symbols on the remaining reels which will also turn into symbols between 2-7 in size. This feature can only appear during the base game.

When 3 or 4 Racoon Scatter symbols appear anywhere on the middle four reels in the base game, the Bonus Meal Feature is triggered. If a player lands just one or two scatters in a spin, these will transform into xWays symbols.

Once a player enters free spins, the Racoon Scatters will transform into Sticky xWays symbols and will remain in place for the length of the feature. These appear as the burger symbol and will increase in size by one with every winning free spin up to a maximum height of 42! 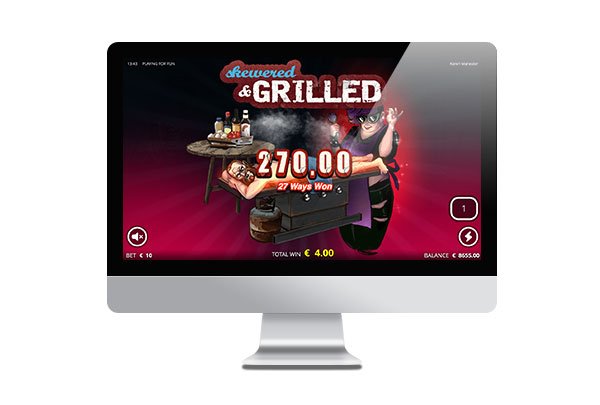 The Infectious Wilds can also appear on reel six and trigger the Infectious Wild feature with the multiplier increasing by 1 with every nudge. Landing further Scatter symbols on the middle four reels will upgrade spins to the Deluxe bonus round and award three further free spins. The scatter will also then become an additional Sticky xWays symbol.

To boost your chances of entering the Bonus game, you can use the game’s xBet feature. Click on the xBet button and it will increase your bet level by 30%, this will guarantee you a Racoon Scatter symbol on reel two for every spin you use it on. The RTP also ramps up to 96.34% when this feature is activated.

As with many of the NoLimit City slots, there is also the option to buy your way into the bonus games. This comes at a pretty high price but guarantees you access to those coveted free spin features!

Yes, landing three or four Racoon Scatter symbols will trigger one of the two free spins bonus features with up to 10 free spins available.

The game can be played from 10c up to €70 per spin but this increases by 30% if the xBet feature is activated.

Karen Maneater serves up some seriously awesome fun – if you like high-action, high volatility slots that is! This game won’t be for everyone as it is extremely volatile but the various features mean it’s fast-moving and offers edge-of-your-seat action, so if you crave excitement from your slots sessions, this will deliver it and then some!