Santa has had the Megaways treatment in this new slot game from Iron Dog Studios. Santa’s Big Bash Megaways is ready and waiting to give you a very Merry Christmas!

You can play Santa’s Big Bash Megaways at any of the following online casinos: 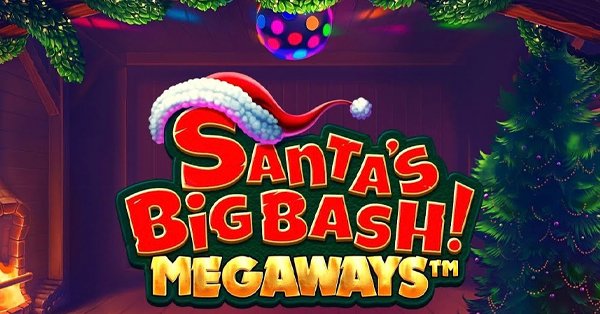 Santa’s Big Bash Megaways is a new festively themed online slot from Iron Dog Studios that incorporates the Megaways game mechanic under license from Big Time Gaming. There are a few different features to this game and combined with the colourful, festive images it’s a lot to take in. Brace yourselves!

Open up the game on your desktop or mobile browser at your chosen casino. You will be met with the intro screen which gives you a brief overview of some of the game’s features. These include free spins, tumbling reels, Rudie the Reindeer feature and of course Megaways to win. There’s a lot to unpack with this game so bear with us and we will take you through each of the main features in the next section of this slot review.

The game has a really fun and festive feel with a cosy looking room in the background complete with roaring fire and a fully decorated Christmas tree. There are even a few empty bottles strewn around the floor. Perhaps Santa left in a hurry? The game features six reels but each reel can feature up to seven symbols creating a variety of ways to win. 117,649 ways to win thanks to the game’s Megaways feature. 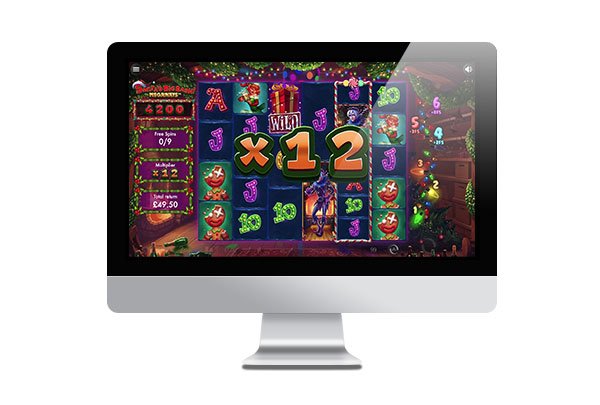 Before you begin, click on the coins button to set your bet level. You can set this to either coins or cash. The game can be played from 0.20 up to €20 per spin. Not too much cash commitment to have a great time playing this game. Although always make sure you set yourself a budget for the game before you start playing so you don’t get caught up in the Christmas spirit and spend more than you intended!

The game features a series of letters and numbers that make up the lower value symbols. The other higher value symbols include an elf, a half-eaten gingerbread man, Scrooge, Jack Frost and a Drunk Santa (that explains the empty bottles)! The Christmas present is the Wild. The Christmas Baubles can be collected and can trigger free spins and finally, Rudie the Reindeer can appear at random and trigger random enhanced features.

Santa’s Big Bash Megaways can be played on a desktop, mobile or tablet device. There is a lot of detail to this game so it does look a lot better on a larger desktop or laptop screen if you want to get the best experience.

Santa’s Big Bash Megaways has several features built into the game. Watch out, you’ll need to be on your toes to keep up with this one!

Each time a player lands a win, any symbols that were part of the winning combination will disappear and new symbols will replace them. This feature allows for additional wins, with new symbols replacing any winning ones until no new wins are formed.

Look out for the Rudie the Reindeer symbols which can appear at random after a win in the base game or during free spins, it’s more likely to appear in free spins though. Rudie isn’t just Santa’s little helper, he also delivers random prizes including additional wilds, feature trail positions, respins, locked reels and even additional free spins.

Light up the feature trail with magic baubles. Each Magic Bauble symbol you land will light up between 1 and 3 magic baubles on the Christmas Tree. 8 or more will trigger free spins. The more baubles you have lit up, the more free spins you’ll receive and the higher up the tree, there are also multipliers that come in to play too. The feature trail works as follows:

Free spins are triggered by lighting up 8 or more Magic Baubles on the feature trail. Once you begin the feature, any reels with all seven positions visible will lock like that for the remainder of the feature so there are more ways to win. Locking a reel also increases the win multiplier x1. Rudie the Reindeer also appears more frequently during free spins. There is a chance to get respins, multipliers, locked reels, wilds and additional free spins.

4 or more consecutive tumbles will also award more free spins. If you manage to lock a reel on your last spin, you’ll also get 1 extra spin. If you can get access to free spins, there are a lot of opportunities to extend the gameplay and hopefully score a few wins along the way too.

In some jurisdictions, there is also the option to buy into the free spins feature although this is not available everywhere. Also, it does come at a price! It’ll cost you between 70x and 250x your stake. Eek!

Yes, Santas Big Bash Megaways has a seriously epic free spins round. If you can access it by collecting enough baubles, there are lots of ways to earn extra perks including respins, multipliers, locked reels and additional free spins thanks to the Rudie the Reindeer feature. 8 or more baubles will score you 8 free spins. The more you collect, there are also additional multipliers that will be applied to your total win at the end of the feature.

The game can be played from 20c up to €20 per spin. The game really gets you hooked so make sure you set yourself a budget before you start playing!

A great game with heaps of festive cheer. Iron Dog Studios have packed this game to the rafters with features. For Megaways fans, this game is one to put on your Christmas wish list, it won’t disappoint with a mega 25,000x max win potential!