White Rabbit is an exciting, high volatility slot from BTG featuring Extending Reels, Bonus Wilds and of course their Megaways™ to win!

Follow us as we jump down the rabbit hole and explore the world of White Rabbit Megaways™ from Big Time Gaming! Find out everything you need to know about this slot in our full review. 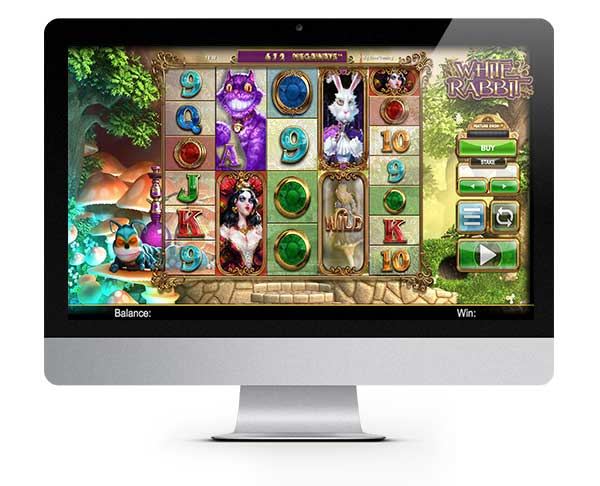 Another bright star amongst the Big Time Gaming catalogue, White Rabbit features the trademarked Megaways™ feature. The game launched in October 2017 and has been gaining some serious traction amongst both casino operators and players thanks to its incredible potential to churn out some almighty wins! Of course, as with many of BTG’s high volatility slots, you’ll need to be prepared for some serious dry spells too!

White Rabbit is of course based on the well known Lewis Carroll story of Alice in Wonderland. This isn’t the first or indeed last time this theme has been used in a slot game, but it certainly allows for lots of exciting features and bonuses if White Rabbit is anything to go by!

As expected the symbols all relate to the theme with the White Rabbit himself taking centre stage. The Red Queen, Alice, the Dodo, Cheshire Cat and Caterpillar also make an appearance, taking small or large forms meaning they can cover more than one spot on the reels. As a Megaways™ slot, up to 7 symbols can appear on each reel during a spin creating a staggering 16807 ways to win!

Big Time Gaming always surprises us with newer and more enthralling ways to mix things up with their slots. They are continually delivering surprises around every turn, and they can be very rewarding indeed! White Rabbit has so many, it makes our head spin a little!

Will White Rabbit have you grinning like the Cheshire Cat or leaving you feeling as mad as a hatter? Hopefully, it will be big smiles all round if this slot delivers some winnings!